Sami Khan is a talented actor who has won the hearts of millions with his charm and humble personality. He is known for his debonair persona and ability to make a project both critically and commercially successful. He is certainly one of the most adaptable artists in our entertainment industry. His pleasant personality, beautiful eyes, and sculpted features are what have the world swooning over his feet. He is one of those actors who has cultivated a devoted fan base in the business. He has steadily advanced to become one of the most recognisable actors. The aactor received praise from the public and the critics for his compelling performances. He is currently the most sought-after actor of his generation and keeps enchanting audiences on television and film.

He already has some of the most iconic roles of the last decade to his name in such a short span. Sami is on a roll, basking in the success of his recent concluded drama Dil Zaar Zaar, and currently wooing his fans with acting chops in Muhabbat Ke Akhri Khani which also starts Alizeh Shah, the actor has bagged another drama.

Titled as Taqdeer, he is all set to pair up with the gorgeous and versatile actress Alizeh Shah once. Yes you read it right. Both the actors themselves shared the good news with fans by posting the teaser of the drama. Have a look! 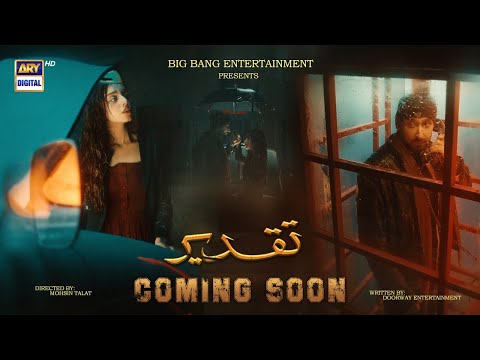 We all know that Alizeh Shah enjoyed great success as Dua Saad in Ehd-e-Wafa. Just 10 shows and 1 film old, the pretty lady Alizeh Shah, has already created a niche for herself in the industry. Loved by her fans, The petite and pretty actress was first seen in Choti Si Zindagi in a supporting role. Soon after she bagged her big projects as leading actress in drama serials like Jo Tu Chahey and Mera Dil Mera Dushman. Definitely born to be an actor, she proved her mettle as versatile artist. She also stole the spotlight from his relationship and breakup with co-star Noaman Sami from Mera Dil Mera Dushman. With her impeccable performance in Muhabbat Ke Akhri Khani, the actress is currently winning over her fans.

From the teaser of drama, it seems that a tale of love and breakup is going to hit our TV screens. Produced by Big Bang Entertainment, it is to broadcast on ARY Digital. With a great cast on board, we can’t wait to watch Taqdeer soon and wish the duo all the very best for it too!